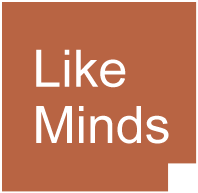 How often does a great conference on an emerging subject attract local, national and global participants to a quiet corner of the UK? Not often, I suspect.

Nevertheless last Friday, 2010 February 26, it happened again at LikeMinds 2010! The first time it happened was in 2009 on October 16th. Back in February 2009, two people met having got to know each other using Twitter, the popular social media tool/service. Scott Gould is a Devon-based web and experience designer. Trey Pennington is an American social media and business consultant. They met in Exeter and set the date for a half-day event which became LikeMinds 09. A local conference centre was the venue. People came from far and wide to became part of the inaugural gathering. Afterwards, they knew that they’d started something and felt the need to repeat it.

This time, just over four months later. More came to LikeMinds 2010, in the same relatively small venue. The same loyal bunch of social media specialists came back and brought more with them. There was more buzz and activity. This time, it lasted a full day and was followed by a business-oriented summit event at a prestigious location.

There is more to come on this conference! But to give you a flavour, here is the talk by Chris Brogan … after I’d had lunch with him!

And, I am sure, more LikeMinds conferences to come.